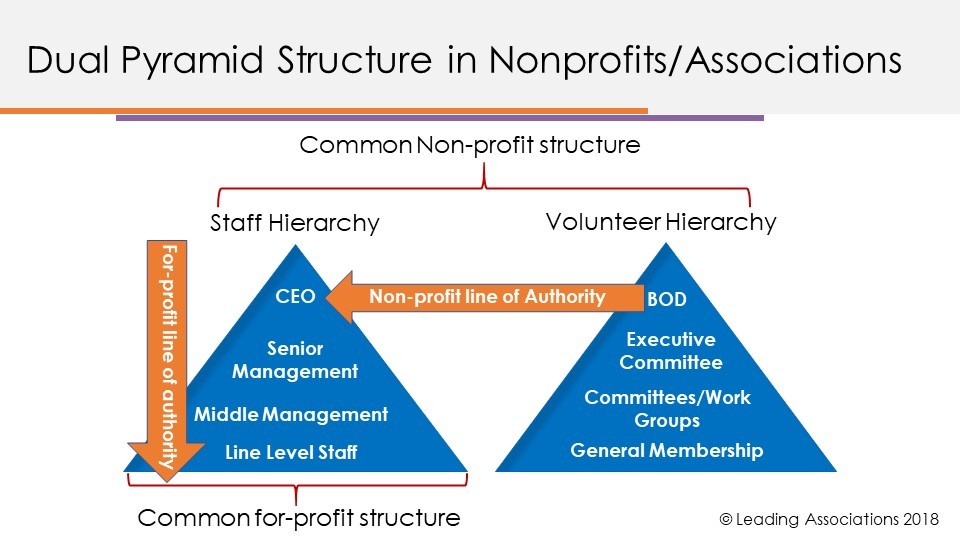 There’s a perception among some that association/non-profit CEOs are less sophisticated than their corporate sector counterparts because they aren’t as highly paid.  The belief is rooted in the idea that the true rock stars only go for the big bucks.

There’s a leadership skill more prevalent in the non-profit sector, which is leadership through influence. For-profit sector leaders could benefit greatly from honing this skill that is often overlooked in the corporate world, which tends to be driven more by power and position than influence.

An owner or CEO in the corporate environment can simply rely on the fact that the buck stops with them and employees can seek other employment if they don’t like executive decisions. Not so in the non-profit sector.

One of the hallmarks of most businesses — despite the lip-service given to having “flatter,” matrix style organizational charts — is hierarchy. You have the CEO/owner(s) at the top of the pyramid with progressively wider layers of upper and middle management until you reach the wide base of line-level workers. What distinguishes non-profit from for-profit management is that there are, in fact, two hierarchies — parallel pyramids, if you will.

One hierarchy is the staff, which typically matches the for-profit corporate structure just described, and the other is a volunteer hierarchy. At the top of the volunteer pyramid is the elected board of directors, with progressively wider layers of committees, working groups and task forces and the wide bottom layer of members/stakeholders that support the organization but don’t hold a volunteer role.

A unique aspect of non-profit leadership is that the customers (members), not the employees or chief executive, “own” the organization – although the members/volunteers reap no direct financial benefit from ownership. Furthermore, the volunteer hierarchy is the ultimate authority and has the ability to hire and fire the staff executive. Thus, staff are ultimately employed at the discretion of the volunteer leadership.

The challenge of this structure is that the staff runs the day-to-day operations, best understands the business of the organization, and is held most accountable for organizational performance. Yet, staff must follow the dictates of individuals that don’t (and shouldn’t) know the inner workings of the organization and whose leadership positions are part-time (i.e., they have a day job), usually unpaid and temporary — generally no more than a 1- to 2-year term in a specific board role.

And the volunteer leadership is elected or appointed, not hired, so there is no (or at best limited) means for maintaining true accountability for individual volunteer performance. If a volunteer leader “checks out,” or is acting in a way that is truly harmful to the organization, in many cases, there may be limited recourse available.

To be truly effective, non-profit organizations require a much higher standard of leadership than for-profit entities.

Why? Precisely because of non-profit leadership’s inability to use a paycheck or continued employment as a form of motivation within the volunteer hierarchy. To enlist others to action in the pursuit of a common goal, non-profit CEOs cannot simply dictate organizational policy. They are employed by the volunteer board of directors, which has the ultimate decision-making authority. A more nuanced form of leadership is required, where influence, rather than power and position, brings results.

In fact, I’ve often observed that an autocratic, authoritarian leadership style as a non-profit CEO can be a ticket to unemployment. At some point, the board will reassert its place in the hierarchy.

Non-profit CEOs are the ultimate influencer leaders.  There’s a quote attributed to both Truman and Reagan (but likely originated by neither) that: “It is amazing what you can accomplish if you don’t care who gets the credit.” Effective non-profit CEOs have that quote tattooed on their foreheads. They must be forever the Wizard of Oz behind the curtain.

As a personal example, as the executive I’ve had to bite my tongue more than once when a volunteer leader has taken credit for my idea, saying something like “This is one of the key objectives of my administration. . . “. Ultimately, though, I’m pleased because I realize I’ve been a successful influencer and the interests of the organization are being advanced, regardless of whose idea it really was.

This style of leadership requires consensus-building, finding others willing to champion your ideas, being able to “sell” your ideas by providing the benefit of your knowledge and experience, as well as building confidence among others that you have the best interest of the organization at heart and can see the big picture.

As a non-profit CEO or volunteer leader, you can’t simply say “do this” and constituents will make it so. Since people are providing their time and treasure voluntarily, they need to see value in contributing and meaning in the work. Otherwise, they’ll find other things to do with their time. They don’t owe you or the organization anything. Exercising this form of leadership is far more difficult than handing down policy from the corner office knowing the foot soldiers have to implement it or find another job.

The corporate command and control form of leadership may get results, but what it may not get is commitment and confidence. Leadership through influence, which comes from trust and relationship-building gets results, but it also gets voluntary — not coerced – commitment, and confidence that what is being asked is driven by a desire to act in the best interest of the organization.

In reality, corporate leaders – in fact, all leaders – should practice leadership by influence, but many don’t. Many simply rely on the job title on their business card and their place in the organizational chart to get what they want, which is really practicing coercion rather than inspiration. Association/non-profit leaders don’t have that luxury; they must inspire others to action because the coercion tool generally isn’t available in the toolbox.