Lead from the Widest Circle First 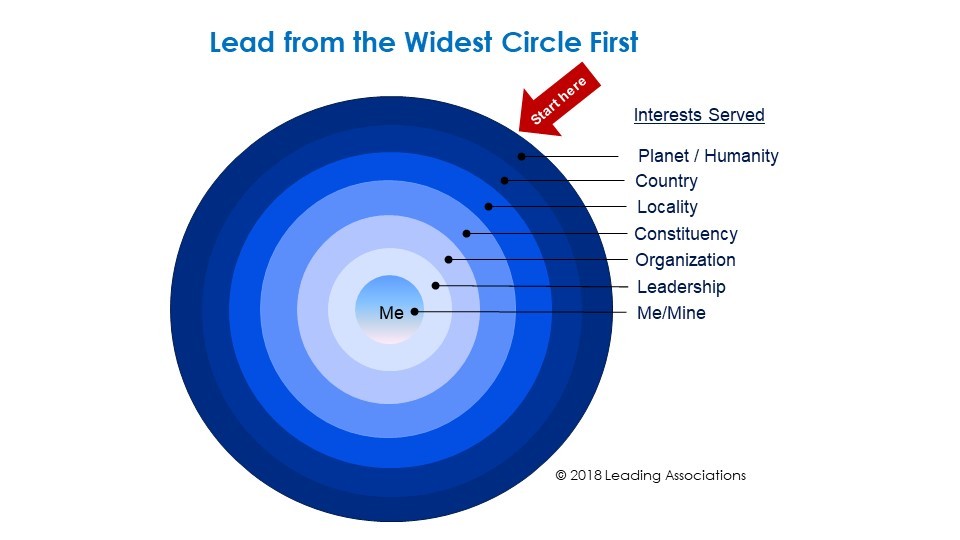 I am going out on a limb, as I’m delving into a leadership topic that, outside of religious or spiritually-centered leadership, is generally avoided: namely, love.

Certainly it’s nothing new from a human resources perspective to state that sincere praise, recognition, public acknowledgement and the like are generally of greater motivational value than money for employees. But in a business context we rarely refer to this management behavior as “love” since that’s a bit too woo-woo, not to mention it might be confused with the romantic notion, which is a slippery slope, especially in the modern work environment.

Nevertheless, in an organizational leadership context, if my actions are governed by love, I will be an exceptional leader.

What does that mean, exactly? I believe love requires action. It must be demonstrated, not simply “felt” or “expressed.”   On a one-on-one basis, when we love others, we want them to fulfill their greatest potential and we take specific action to support that outcome.

Beyond the one-on-one focus is an aspect of leadership described as “business ethics,” “sense of public responsibility,” or “serving the greater good.” Many times it finds itself in vision statements, especially in organizations founded for the public good, such as charities and religious organizations. I think it’s unfortunate that it doesn’t make its way into every organization’s organizing documents and strategies, or at the very least, leadership conversation.

I would suggest considering strategic decision making from the context of love (or serving the greater good, if that feels more comfortable), drawing the widest possible circle first (the planet, humanity), then drawing consecutively smaller circles from country to state to city to community to organization to family and, last, to self.

The reason most organizations’ public service work is cynically viewed as a public relations or marketing effort rather than altruism is because the decision to serve was made within the context of the smaller circles, not beginning with the largest circle first.  We’ve all had the experience of someone saying they’re “doing us a favor” when, in fact, they were clearly thinking of their self-interest first and the fact that it benefited us was purely ancillary. We see through it as a shallow, self-interested gesture.

When individuals and organizations get into trouble – particularly legal and/or ethical trouble – I guarantee they aren’t “leading from the widest circle first.” They chose a smaller circle, perhaps the smallest: how does this benefit me? Or, they go no further than the organization circle: for example, what’s in the organization’s best interest (profits), then to the smaller circle of self (my profits from the company’s profits), which leads to infamous examples like Enron and its executives.  Frequently, the widest circle politicians lead from is the constituency circle, which may lead to decisions that benefit a locality or a party to the detriment of the larger society.

Fifty years after his death, it is a poignant time to recall that although Dr. King may have been initially advancing the well-being of a specific constituency and cause, he led that effort from the context of creating a better world; specifically, a world where people are judged by the content of their character, not the color of their skin. Everyone falls within that widest-circle human desire to be judged solely on the basis of character.

There is a word Zen monk Thich Nhat Hahn has coined: interbeing. Isn’t it obvious, he says, that we “inter-are”? I didn’t farm the food in my refrigerator or generate the electricity powering my house. I depend on the farmer or the power company for these, and they in turn depend on me to pay for these items so that they can feed their families and pay their employees.

In other words, I cannot take a small circle action (not paying my power bill, for example) that doesn’t affect someone else. And when it affects someone else, it affects me (rates go up for everyone to compensate for non-paying customers like me). The more globally intertwined organizations and economies become, the more obvious it becomes that, as among cells in a body, sickness and wellness spread quickly.

If you have trouble calling it leading with love, call it leading from the widest circle first. Either way, if you practice it, you will be an extraordinary leader.